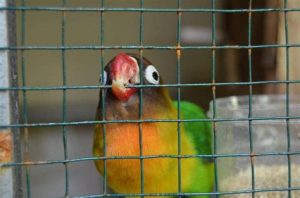 Don’t get us wrong, Sean isn’t black bagged again, he’s just  in a sort of limbo, back at the super duper uber mega ultra maxi-max in Youngstown. He had his hearing, gave his statement (recorded here for your listening pleasure) and the committee hearing his plea recommended against his return to exile. This means, for the moment, he’ll be in the same state as his lawyer and his spouse, Lauren! But the fight isn’t over.

Sean was transferred from the supermax in 2019 to Virginia where he had no serious rule infractions at a much lower security facility. So, why is he back at a supermax in Ohio if not for retributive reasons? Sean dared to tell PREA, ODRC and the world about the assault he suffered at the hands of former ODRC inspector Trevor Clark and has a case pending in the Inter-American Court on Human Rights on his torture in Ohio prisons. He’s even written a book undermining the legitimacy of the existence of Ohio!

If you’re concerned about Sean’s ability and are willing to tell the officials in Ohio to not transfer him, you can contact the following officials to let them know that Sean deserves a fair shake: