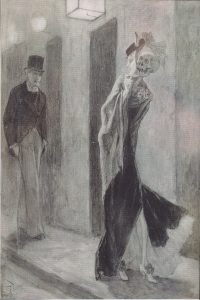 Since then, I have sent Warden Shady Three-Eighty over a hundred kites asking for “prior approval” for everything that would constitute “conducting business”– like swiping my identification in exchange for a tray.

Shady didn’t like that. Nobody wants to answer over a hundred kites when they could be eating donuts.

Then, Shady told me that he wasn’t behind this nonsense, that ODRC Counsel (and FBI agency liaison) Trevor Clark– “Trainwreck Trevor” –had ordered the theft of the mail. That caused me to have Shady removed from 264 lawsuits getting filed, and to replace him with Trainwreck as the defendant.

He’s a big guy. Hard to hide. But, suddenly, after I revealed to the world that Shady had thrown Trainwreck under the bus, Shady was no longer here. Instead, we have “acting warden” Susan Mockabee. Perhaps outting Trainwreck and getting Trainwreck sued 264 times in 88 counties was a kind of career-changing event for ol’ Shady Three-Eighty.

At any rate, Susan Mockabee took over Shady Three-Eighty’s office and the desk covered in donut boxes and Swain kites. Susie decided to answer them. At least 28 of them. Late, of course.

Her answers are ridiculous and not worth getting into. But, the important thing is, I sent those kites as:

She did this as the Warden of Warren Corruptional Institution.

As I now have recognition as the Authorized Agent of the Army of the 12 Monkeys from the (acting) Warden, I wonder what excuse the mailroom monkeys will bring up for not giving me the mail from the Secretary of State? Seems that I have implicit “approval,” as recognition implies approval, and it seems that this “approval” is “prior” because the mail has yet to be served.

I wonder who the next acting warden will be when Trainwreck yanks Susie?

Stay tuned as, eventually, I take away millions of dollars of bloc grant funding from the fuckweasels and make their plantation crumble…

Please be advised that I send this as an electronic record for legal purposes.
I received today a Kite Response from acting Warden Susan Mockabee. The Kite Response is stapled to, by my count, 34 kites. I explicitly sent those 34 kites to the warden as:

Also be advised that on 05 December 2017, I served a WCI agent at the mailroom with a copy of an injunction directed to the Warren County Court of Common Pleas. That injunction was captioned, “THE ARMY OF THE 12 MONKEYS vs. WARREN CORRECTIONAL INSTITUTION.” This means that WCI was placed on notice that (1) legal action was pending, (2) the legal action was on behalf of the Army of the 12 Monkeys, and (3) I was the Authorized Agent of the Army of the 12 Monkeys for purposes of that legal action.

In her response to those kites, she did not, at any time, refute my designation as Authorized Agent of the Army of the 12 Monkeys.

That is important because, de facto, the Warden of WCI recognizes my legal status as Authorized Agent of the Army of the 12 Monkeys unincorporated association while civil proceedings are being initiated.
Wanna give me those legal documents from the Secretary of State that you stole on the way in and call this a draw, now that I have recognition from the warden of my legal designation prior to the service of that mail– what you claimed I needed in order to have the mail served to me?