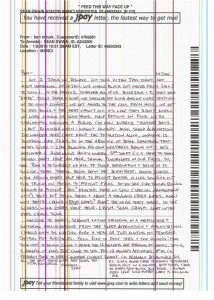 We also heard rumors that at least one of these prisoners is being tortured in a “suicide cell” just like Sean was initially. The guy’s name is Shawn Marshall. His number is 461-448.  Word is Marshall went to this torture cell on Tuesday Jan 15th. He doesn’t have friends or family on the outside, so there’s no one to stop them from keeping him in torture cell for a long time.

Sean has not had his final security reveiw or been transferred yet. ManCI staff are depriving Sean and others accused of 12 Monkeys activity of food and sleep.  Read the JPay for details.

Please call ManCI at 419-526-2000 demand that they stop torturing Shawn Marshall (461-448) and that they adequately feed prisoners in seg and allow them to sleep.