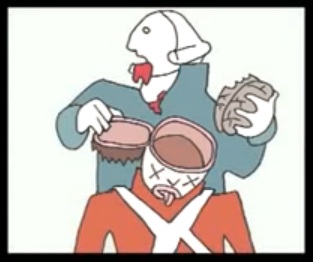 See a funny video of George the terrorist here: https://youtu.be/l7iVsdRbhnc

In 2013, ODRC Counsel Trevor Clark told me that Americans are not permitted to advocate violence. More recently, a federal judge said we are only allowed to advocate political change through peaceful means. I’m assuming that “peaceful” equates with “nonviolent.” All of this indicates that poor, deluded hierarchs believe that political violence is not legitimate.

Poor, deluded hierarchs keep telling me that the crux of the problem is my “belief in political violence,” my belief in the exertion of force to cause harm or injury, of or related to the affairs of government. And I’m not quite sure what hierarchs mean by that.

I believe in gravity. I believe political violence is real.

So, we’re back to believing in gravity and political violence.

The United States of America gained recognition of its independence from Great Britain in the Treaty of Paris in 1787. In that treaty, Britain ceded the 13 colonies and the rights of discovery related to all lands west of the Allegheny Mountains. In essence, Britain recognized the United States as an independent, sovereign nation.

Consider how those cop killers and terrorists gained their independence from Britain.

George Washington led a rebel army outnumbered by the legitimate, recognized government’s forces, so they engaged in guerrilla warfare, shooting the redcoats in the back. I’m not attributing any value judgment to that, whether shooting redcoats in the back was right or wrong; I’m simply pointing out that that’s what they did.