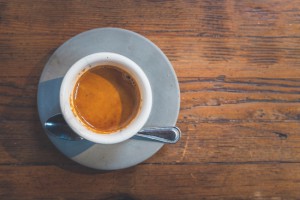 From The Final Straw

There’s a trend that’s been happening for a long, long time, where comparably wealthy people chase around poor people and kick them out of their living spaces. We now use the term “gentrification” to describe this social and economic phenomenon.

Back in the old days, before FDR had the sprawling U.S. highway system built on the cheap by desperate folks who lost their jobs in the Great Depression, people wanted to live close to their work. And since factories were built largely in the major cities – or else major cities popped up around the factories – that’s where workers lived. People with money were drawn to city centers and the poor were left in shanty-towns and hovels on the fringes of the urban metropolises.

END_OF_DOCUMENT_TOKEN_TO_BE_REPLACED

I, Ben Turk have decided to resign from doing support for Sean Swain.

Anyone who received the recent document Sean sent out with instructions that it be posted, please know that the people who’s personal medical information is included in that document requested that it not be published.

Sean is obviously in need of support right now and I hope other people contact him and continue the work I can no longer do.

Swain- Thanks man- I received lots of love and support- I can’t even respond to all of these letters- so I wrote 12 people back and ask them to  send my appreciation to everyone else that wrote.

Listen- these people are out of control up here. Sunday the 13th they actually put the dude that broke my jaw like 5 cells down from me on the same medical range! Man this was not supposed to happen for sure- he was talking all kinds of crazy shit over the range- he was on suicide watch- then some CO was working- said “Hey! That guy can’t be up here- he assaulted Mahone!” so they quickly moved him Monday morning…

They know we got a separation man- but somebody wanted to let him rub it in and fuck with me.

END_OF_DOCUMENT_TOKEN_TO_BE_REPLACED

It’s called Eating Bob, it’s produced by Insurgent Theatre, and appearing about once a month at InsurgentTheatre.org. You can also share it around on the social medias.

A rambling pre-apocalyptic roadtrip story about drug addled sex maniac cannibals hell bent on getting hold of an eleven million dollar inheritance and using it to end civilization, Eating Bob is the gonzo brainchild of infamous anarchist prisoner and Ohio Governor-in-Exile Sean Swain.

Swain dives in to pure fiction with this extravaganza of senseless sex and gratuitous violence (as opposed to the strict non-fiction stories of his ascension to Governor in Exile of Ohio and his other purely factual escapades in the Ohio prison system, which are well documented at SeanSwain.org).

We just received mail Sean dated Aug 28th. The USPS date stamp on it is Sept 14th. The prison is holding Sean’s outgoing mail for weeks.

This is a kite he included in his letter: 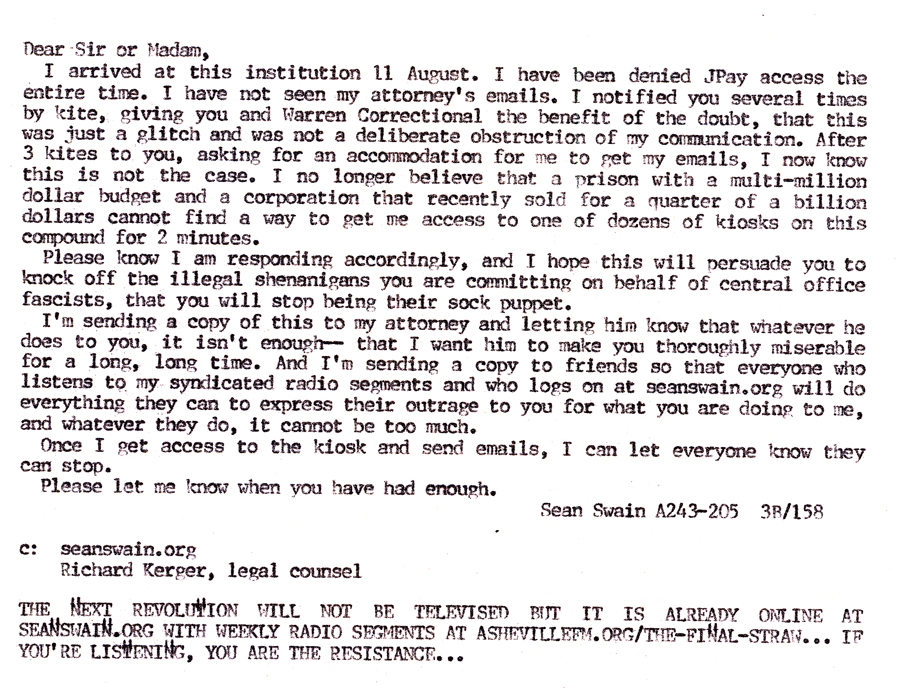 We asked supporters to contact the prison and find out what is going on with Sean’s communication access. Compiling information from various supporters, it appears Sean has been given a 60 day JPay restriction, but is on level 3A. The Deputy Warden claimed to not know why Sean wasn’t making phone calls.

The letter from Aug 28th also included this copy of an affidavit Sean wrote and filed with the courts, describing his situation from before we pressured the prison to put him in 3A housing. Read that here.

On Sept 8th, Sean appears to have had brief access to the WCI JPay kiosks, which are notorious for being always broken. Emails he sent to some supporters contained the subject line “open letter to the ceo of jpay at his home addresses” but had no contents. After this, Sean’s access to email was suspended.

We’re not sure what to make of all of this information, and encourage anyone who seeks to interpret Sean’s wishes and act in solidarity to exercise caution and proceed of their own volition.

We’re not sure what’s going on, but Sean Swain has been blocked from receiving (and presumably sending) JPay emails. He also has not called his primary supporters, or The Final Straw for a new radio segment. We’ll probably hear from him via snail mail sooner or later, but until then, we’ve got to assume he’s cut off.

When we called the prison, they told us he was not in the hole, and did not have any restrictions on his communication. We suspect they may have transferred him back to a 3B spot, undoing the success of our recent call-in effort. They refused to tell us what security level the block he is held in is on and they got surly and authoritarian when we asked.  It seems that the officers at Sean’s newest prison, Warren CI need to learn that their jobs are a whole lot easier when they don’t provoke anarchists from across the country to call and check in on the welfare of our friend who they hold captive.

You can call Warren CI and ask the same questions we asked- why does Sean not have access to communication, what security level is he currently housed in, and does the JPay kiosk in his (or any Warren Unit) actually work right now? You can also leave Sean’s Case Manager a voicemail by punching extension 2281, or try and talk to deputy warden Robert Welch, who maybe got Sean moved from 3B to 3A a few weeks ago, he’s at ext 2005. Whatever lucky anarchist happens to be on the call when when of these officers breaks and spills the beans, please drop a line to AnarchistSwain@gmail.com.

Sean doesn’t like when they fuck with his communication access. Being a writer, getting his voice out is one of the things that help Sean feel connected to the outside world. So he’s probably feeling alone and frustrated. Also, his birthday was Sept 12th, so if you haven’t written for a while, or missed sending him birthday wishes, please consider dropping a line and letting him (and the mailroom monkeys who have to read all his incoming communication) know that he is loved and missed.

It was great to get Issue #2 of Wildfire, and I was even happier to read Michael Kimble’s letter which was, in part, a response to something I wrote in Issue #1. How cool that we have this forum to get this dialogue started– on whether or not hungerstrikes and work stoppages are reformist.

I wrote previously that hungerstrikes and work stoppages are categorically reformist, that by employing them, we seek concessions from those in state power but we do not attempt to eliminate state power entirely.

In his response, related to hungerstrikes, Michael Kimble points out that, at the time Issue #2 went to press, he and I were both on hungerstrikes– which is true. But, as always, our recourse to going hungry did not topple the hierarch enemy, but only made me a hypocrite.

A hungry one, at that.

So, in that sense, hungerstrikes are vindicated as a means for achieving small victories and concessions, but not as a means for bringing anything down.

In contrast, Michael brings up a scenario of a wide spread work stoppage where, if no one goes back to work, the system does collapse. Michael is right, of course, and what he describes is the anarcho-syndicalist dream, the work stoppage to end all work stoppages. The problem is, this has been a dream for centuries because it never materialized, in the free world or in prison. END_OF_DOCUMENT_TOKEN_TO_BE_REPLACED

From The Final Straw Radio

We live in an inherently twisted society punishes those who rob banks rather than punishing those who them. This seems more than just a little bit unreasonable to me, given that the obscenely wealthy shouldn’t store all of their ill-gotten loot in concentrated places and then irrationally expect the rest of us not to have designs on divesting them of it.

Banks are the most prominent symbol of our culture’s blind adherence to the institution of property. The fact that thousands upon thousands of banks open up bright and early, six days a week, and close at the end of business with rarely ever a single robbery speaks to just how completely we are caught up in the delusion of capitalism’s legitimacy.

Some of the most famous figures in American history were bank robbers: Jesse James, Butch Cassidy and the Sun Dance Kid, Bonnie and Clyde, John Dillinger. Robin Hood is a kind of universal archetype, the model bank robber from an era before the existence of banks.

END_OF_DOCUMENT_TOKEN_TO_BE_REPLACED

From The Final Straw.

The Ohio Adult Parole Authority. It was started in the early twentieth century after the Ohio Penitentiary caught fire and a lot of prisoners died. At its inception, the parole board was to act as a mechanism to reduce the prison population responsibly.

It never seemed to do that.

In its modern incarnation, the parole board has been rife with abuses and scandal. In its hey-day in the 1990s, when every prisoner had to appear before the board due to indeterminate sentencing schemes, the parole board was at its worst. Then Board Chair Margaret Ghee would routinely issue a prisoner a five-year continuance of his sentence, then make him an offer: he could keep the five years or trade them in for the Penny Trick. For however many of the ten pennies she dropped hit the floor when she let go of them, the prisoner would do a year. If the prisoner opted for the pennies and caught all ten, he could go home. If he missed all ten, he’d end up with ten years.

If he opted for the Penny Trick, Margaret Ghee would chuck the ten pennies over her shoulder and as they hit the floor, she’d say, “Ten years. Get out.” END_OF_DOCUMENT_TOKEN_TO_BE_REPLACED

Robert “Skinny” Mahone had been my next door neighbor since we both transferred from the Ohio State Penitentiary to L-block at Lucasville (for a captivating account of that rip-roaring adventure, check out “Prison Bus to Shitville,”). Skinny got
pepper sprayed and dragged to the hole by racist fuckweasels (for a captivating account of THAT fuckin’ madness, check out “The Hunger Conspiracy“). Because all of you savage cannibal maniacs out there beyond the fence mounted an all-out assault on the Shitville fuckweasels, they dusted Skinny off and returned him to his cell on L-block, his balls still burning from the pepper spray they smeared in his underwear (he called this “waterboarding his nuts”).
But Skinny was no longer my neighbor when I left Shitville on a surprise trip to Warren Correctional. Skinny was in the hospital.

Here’s what happened:
JPay sucks. At Shitville, JPay has four kiosks for general use in the library and two in the gym. Routinely, most of them are broken. This leads to a log-jam as sixty to eighty prisoners attempt to get or send emails or download music in the span of an hour. In the library, for about a week, only one kiosk was working. This led to a whole block of angry maximum security prisoners ready to rumble. Skinny and another prisoner named ATL had a heated exchange over ATL monopolizing the only operable kiosk.
So, JPay’s negligence led to what happened next…
END_OF_DOCUMENT_TOKEN_TO_BE_REPLACED