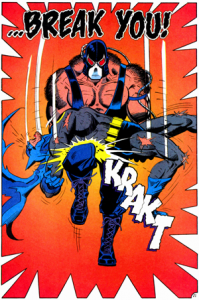 Up until now, I’ve taken on a lot of controversial topics from a radical perspective, and I have often taken the most militant, anti-authoritarian position in many current  debates, but there has been one very serious topic that I have avoided. It’s kind of a “third rail” of broadcasting, something you just don’t talk about, a position you just never articulate if you want to keep your job.

Now, I know – there are haters out there who can’t wait to send the hatemail. They say I’m full of overblown rhetoric … and they say I don’t really know what I’m talking about … and they say “what kind of anarchist watches ‘Dancing with the Stars’?” and all  of them may be celebrating the end of my radio career – if that’s what this is. Here goes:

This isn’t a position I arrive at easily. I’ve struggled with this. To be clear, as a child, I wanted to BE Batman. When I was 3, my mom sewed me a Batman cowl and cape. It was the most god-awful thing anybody’s ever seen – the cowl looked like a blue paper bag with eye holes cut into it and 2 crooked ears. The cape was all jagged and really long on one side. If you didn’t know better, you’d almost think my mom HATED me.

Hey … wait a minute. That would explain a lot of things … like how she kept rolling my head up in the car window – and we didn’t even have power windows yet …

But, I digress. My Batman costume. I was SERIOUS about being Batman. Whenever my parents had guests at the apartment, I’d sneak away to my room and don my cape and hood, and I’d put a pair of underwear on, over the top of my pants. You know, like Batman. Then I would sneak up the hallway and leap out into the living room, yelling “HAH!!” Everyone ALWAYS froze.

I didn’t know it, but they weren’t thinking,  “How did Batman get in here?” or , “I never knew Batman was so incredibly short”. No. They were thinking, “What is that ugly thing on that kids’ head?”, and, “Why is he wearing underwear on the outside of his pants?”, and, “What the hell is WRONG with that kid?”

Yes, I wanted to be Batman. From a young age, I was steeped in the Batman mythology. And I have now reached a point in my political and philosophical development where I must finally face the cold hard reality:

Of all the so-called super-heroes in the comic book universe, Batman is the most unconscionable – a defender of wealth and privilege and inequality. In fact, Batman is a unique and fitting symbol for everything that’s wrong in the world.

Consider, at a young age, Bruce Wayne saw his millionaire parents murdered. They were murdered by desperate criminals who inhabited Gotham’s bloated underworld, a desperation caused by the vast inequality and the maldistribution of wealth between the privileged few represented by the Wayne family, and the struggling many.

So, as Bruce Wayne got older, he could have done a lot of things. He could have gotten introspective and contemplative, and he could have searched for the deeper meaning, an understanding of what the causes of crime really are. He could have dedicated his vast fortune to the wretched for the earth and their material improvement – or, better yet, he could have financed revolution to topple such an unjust order. But, no. Bruce Wayne invested in cutting-edge technologies so he could develop a really cool car, so he could wear a bad-ass Kevlar suit, so he could go around getting his rocks off taking out his unhappy childhood on all the desperate and drug addicted who were driven to crime BY HIS ACCUMULATION OF WEALTH.

He’s a hypocrite whose personal greed is the driving force that creates all the worlds’ ills that he runs around solving. So, objectively, it makes perfect sense that the Joker hates him. And Cat Woman. The Penguin. Mr. Freeze. Bane. All of them.

Batman is a defender of a tired and immoral order, the champion of the 1%, with his pretentious brooding and his ridiculous, dark angst.

So, we have to find a way to kill Batman. And not just in the comic books, but we have to exterminate Batman, eliminating him from the larger culture. It’s not enough even to kill batman in the cultural sense, but we have to kill the Batman in our heads.

That’s the most insidious Batman of all.

We all need to unleash our inner Joker and say, “Why so serious?”

This is anarchist prisoner Sean Swain from somewhere inside the Ohio torture complex. If you’re listening, you ARE the resistance …