What is an anarchist engagement? I ask because I’m running for Ohio Governor in 2014 as a write in candidate from Ohio’s super-duper-uber-mega ultramax facility.
Yeah, I know.Your thinking, ‘Running for office is not anarchist-it’s reformist at best’ and thinking ‘A prisoner getting elected?’ And you likely conclude, this is all just further evidence-as if we need more-that Sean Swain is a wing nut. I would say that this is further proof that I’m brilliant and completely misunderstood- thats my story and I’m sticking to it.
I’ve been told that by running for Governor, I’m promoting the idea that reformist ballots are the answer-registering to vote, voting and all the hierarchical implications that that entails. I’ve been told that we need revolution, not diversions into electoral wheel-spinning,and that I’m doing a disservice promoting the idea that elections can be a solution.
Okay, now consider:
It’s not my goal to become Ohio Governor so that I can maintain the state. I’m openly and admittedly an anarchist and I’M running as an anarchist. I’m promising that, if elected I would tear down the state and establish the Ohio Autonomous Zone.
In fact, I have a program already planned out. It’s on my website. My first day in office, I would empty Ohio’s prisons. I would de-commission the National Guard and I would give the weapons to the Native American tribes I would be inviting back.
According to the Treaty of Greenville, they still own this territory. So it’s not exactly reparations for the genocide they experienced, but I’D give them the land back and a bunch of rifles and tanks and Apache attack helicopters in order to defend it.
With no budget signed-ever- no cops would get paid so there woulds be nobody standing between us chasing the banksters and crapitalists out of here with torches and pitchforks-like they have deserved for centuries.We could then export revolution from the Ohio Autonomous Zone. END_OF_DOCUMENT_TOKEN_TO_BE_REPLACED 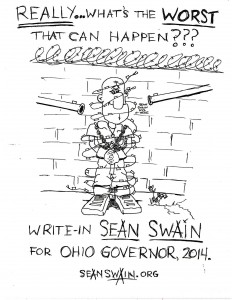 Anarchist prisoner Sean Swain Runs for Governor
as a Write- in Candidate from Ohio’s SuperMax Facility,
Invites a Million Carpetbaggers to Hijack Election

Sean estimates that he received approximately (8) eight votes in 2010, the last time he ran for governor from prison. Back then, Sean Swain had a hard time convincing voters they should “abolish” the state of Ohio, electing Swain with an anarchist mandate to forcibly disassemble the State once and for all. But Swain says a lot has changed since 2010 and he believes a sizable groundswell is coming around to his way of thinking– that the government, and the corporations whose interests the government serves, are the real enemies to be resisted and eliminated.
Swain points to the Occupy Movement, which was pre-figured in his 2007 work Last Act of the Circus Animals, and it’s violent disbandment by the government’s agents of control as proof that many are imagining “a different future.” Swain believes he has the plan for getting there. If elected Ohio governor Swain promises to:
* Decommission the Ohio National Guard
* Empty Ohio’s prisons and turn them into squats
* Recognize Native American land rights as set forth by the Treaty of Greenville
* Arm the tribes with national guard weaponry, to include tanks and attack helicopters,
* Refuse to sign any budget causing the government to shut down, and
* Sign an Executive Order making it legal to assassinate him if he remains in office longer than 90 days.