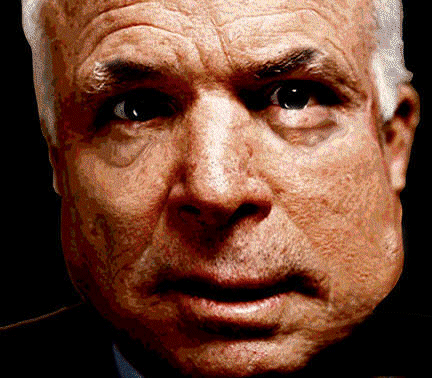 Donald Trump is the son of a real estate mogul. He went to the Wharton business school before inheriting his daddy’s fortune and blowing it, filing for bankruptcy several times. He’s an obnoxious know-nothing blow-hard who still insists that he has somehow earned his position of privilege in our world.

In the midst of his run for U.S. president, Trump made some controversial comments, claiming that Arizona Senator John McCain, a Vietnam vet and P.O.W., is not a war hero. As a consequence, the mainstream media has gone totally bonkers. Apparently, it’s unthinkable to question McCain’s war-hero status. I’m not sure why.

So, look. We’ve got a situation here similar to something a math-whiz friend of mine once described: he said that if you lock a hundred chimps in a room with a computer keyboard, over a long enough trajectory, one of them, clicking at random, will type a Shakespearian sonnet. Now, what we’re dealing with isn’t a sonnet but the same scenario– if a chimp named Donald Trump babbles long enough, he’ll say something I’ll agree with. So, don’t take this as an endorsement of that jackwagon, since I’m probably soon going to be running against him, but I agree with Trump for once.

The fact is, John McCain is no hero of any kind. Donald Trump got it right.

John McCain was a graduate of the naval academy and when his country called on him to suppress democracy in a foreign land by obliterating innocent men, women and children, John McCain flew 23 bombing missions over Vietnam, killing possibly tens of thousands of total strangers, before he was shot down and held for five and a half years as a prisoner of war.

Poor, deluded hierarchs think McCain is a hero for “serving his country,” which means he followed the orders of an idiot in a suit and slaughtered unarmed strangers who had done absolutely nothing to him. If blind obedience to orders to kill makes someone a hero, then the serial killer in the Son of Sam murders, who simply obeyed the orders to kill given to him by his dog, should have been given a ticker-tape parade rather than a life sentence.

Twenty-three times, John McCain hit a button to unleash bombs on people minding their own business in their own country. I remember 8 years ago when McCain ran for president against Obama, McCain tried to make it appear that Obama was close friends to former Weatherman Bill Ayers, whose group detonated a bomb in the U.S. capitol. In that bombing, no one was hurt. It seemed hypocritical to me that McCain, who dropped tons of bombs 23 times, criticized Bill Ayers bombing of the U.S. capitol when Ayers courageously and thoughtfully opposed the illegal war in which McCain was a participant.

At the time, I was inspired to write this poem:

Bill Ayers was wrong for making a bomb
Or so says John McCain
Because women and children Bill never killed
Dropping it from a plane.

So, why was John McCain a hero again? Oh, yeah. He was held for five and a half years as a P.O.W… But McCain killed thousands on his bombing runs.

To contrast his situation with mine, I killed one guy and I’ve been held by an illegitimate rogue state for 24 years and counting. McCain killed thousands and served five and a half years.

I don’t hear Senator John McCain, the lawmaker, proposing to revise his country’s criminal codes to reduce killers’ sentences to five and a half years. By all rights, that murderous maniac should still be in custody.

Unabomber Ted Kaczynski killed a fraction of one percent of the number of people McCain blew to pieces, and he’s buried in the basement at the federal super-duper max in Colorado while McCain pontificates his hierarch madness from the floor of the U.S. Senate. In a sane world, Ted Kaczynski and John McCain would trade places.

Ever read Kaczynski’s Industrial Society and Its Future? He spends a little too long in his critique of over-socialized leftists, but it’s still awesome. And I don’t care how long you lock that monkey John McCain in a room, nothing nearly that profound would emerge from his random clacking on the computer keyboard.

But let’s lock him in there anyway. And let’s stop calling war criminals “heroes.”

This is anarchist prisoner Sean Swain from the Southern Ohio Correctional Facility in Lucasville. If you’re listening, you ARE the resistance…
* * *