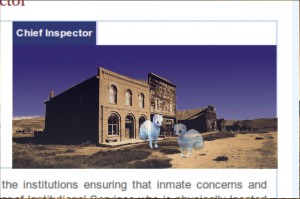 On Wednesday Feb 11th, we decided to employ a “shotgun approach”  after a week and a half of letting the ODRC jerk us around with false info and obnoxious lawyerism. No, we don’t mean the shotgun approach the insurrecto-trolls and ODRC officials might fantasize or accuse us of using. We’re using the word “shotgun” metaphorically: if they won’t tell us who to call to get Sean what he needs, we’ll just call everyone, unload willy-nilly at the full range of possible enemies and hope something sticks. Well, some weird things stuck… If you believe in democracy, it’s probably a good idea to look closely at what it produces.

THE GOOD:
The staff of the new chair of the Correctional Institution Inspection Committee (CIIC) made some calls. This is an Ohio Senate + House Subcommittee, composed of elected politicians, and apparently Democratic Senator Sandra Williams’ staff is idealistic enough to think that means they oughta follow up on calls concerning the health, welfare and rights of captives in Ohio’s correctional institutions. She was very helpful, and given that Joanna Saul, the CIIC Executive Director has demonstrated that the responsibilities of Inspecting and overseeing Ohio’s correctional institutions can be totally neglected without consequence, we appreciate the trouble Williams’ office put into this. END_OF_DOCUMENT_TOKEN_TO_BE_REPLACED