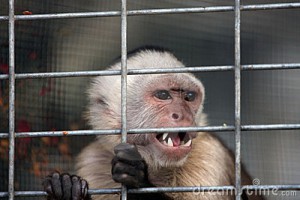 Third part in a series. Here’s part 1 and part 2
Sometimes bad news is good news. When you come to the conclusion that reformist action is impractical, unreasonable, and futile, it doesn’t foreclose on resisting completely. Every steel door that slams shut should always provoke us to contemplate how to cut the bars windows. Slamming the steel door of reformism liberates us to consider direct action, which is what anarchists WANT to do in the first place.

In the prison context, that again leads back to a discussi Monkeys. Now, before going any further, please kee that I wa the super-duper-uber-mega-ultra-hyper-tur the pretext of bei the Army of the 12 Monkeys– an accusation I have consistently denied. My counsel, Richard Kerger, has action, SWAIN VS. MOHR, now posted at seanswain.org, challenging this frame-up. Having said that, I was a witness to what occurred at Mansfield Correctional when the Army of the 12 Monkeys happened, and I think I’m fairly qualified to present an analysis of what this event implies for anarchists and for direct action in and outside of prison.

For anyone who hasn’t heard about the Army of the 12 Monkeys, here’s the deal: The Army of the 12 Monkeys distributed flyers and manuals– thousands of them –all over the compound of Mansfield Correctional. These materials promoted a campaign of sabotage, with cool-looking graphics and brainstorming lists of all the stuff prisoners could do to make the prison unmanageable.

It worked. Prisoners joined in, costing the prison HUNDREDS OF THOUSANDS of dollars in damages. Just one contract with an outside firm to replace the plumbing in the chowhall was six figures. Four months after they emerged, prisoners with organizing materials were still being rounded up, and a riot occurred at a second prison, Lake Erie Correctional, that prison fascists initially ADMITTED to be related to the Army of the 12 Monkeys before they DENIED it.
Past is prologue. Some important points for anyone who wants to facilitate direct action resistance and abandon reformist wheel-spinning once and for all:
First, from what I gather, the 12 Monkeys did NOT seek reforms on the promise of going back to their assigned seats. They said, “Prison sucks, let’s destroy it.”
Second, they made no effort from what I saw to explain why prison sucks. No political education, only promoted ACTION.
And third, it appeared that membership equated with action– monkeys ARE as monkeys DO. No central leadership, no membership cards, only an invitation for prisoners to participate.
In short, the Army of the 12 Monkeys WAS everything that reformist wheel-spinners are NOT. And the FBI was on site in 14 days. I recently filed a Freedom of Information Act request with the FBI, asking for all files that contain references to my name and to the Army of the 12 Monkeys. The FBI’s initial search yielded 1,297 pages.
Do you know how many boxes of Crayons they had to have gone through?
I want you to consider something. The prisoners who created the Army of the 12 Monkeys– at least the ones I’ve met –are NOT exceptional. In fact, ODRC Counsel Trevor Clark, Trainwreck Trevor, when interrogating me, read off some of their IQs. Their IQs were, according to Trainwreck, below 100. Below average.
My point is, at random, you could pick a group of prisoners smarter than the 12 Monkey organizers, at any given prison on the planet, and they would be even MORE capable of brainstorming a list of direct actions and manuals than the 12 Monkeys were.
Also, I know from more than 13 years at Mansfield Correctional that there was NOTHING exceptional about that prison, or the circumstances there, or the “conditions for revolution” that socialists are always screaming about. Mansfield Correctional was ordinary. It’s staff and administration were ordinary, and the prisoners who created the Army of the 12 Monkeys were ordinary.
So, based on the 12 Monkey events, if you’re an anarchist tired of reformist wheel-spinning and sitting on the sideline, you can simply BEGIN direct action… And all you need are ordinary people… Against an ordinary government… With ordinary staff… And ordinary administrators. The ONLY ingredient you have to bring to the table is the IMAGINATION to think past reformist failure.
To be clear here, I’m not saying YOU need the 12 Monkey manuals. I’m saying you can likely IMPROVE upon those. The average person knows how to resist and why, if only provoked to consider it. And I’m not talking about the potential for making a prison unmanageable. I’m talking about making SWIVELIZATION unmanageable.
The FBI doesn’t have enough Crayons to write 1,297 pages on all of us.
For Ihsan, this is anarchist prisoner Sean Swain from Ohio’s supermax facility. If you’re listening, you ARE the resistance…