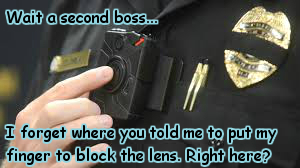 In the wake of the murders of Mike Brown and Eric Garner, which occurred in the wake of the murders of Oscar Grant and Amadou Diallo, which occurred in the wake of thousands of other murders committed by law enforcement going all the way back to the lynchings of escaped slaves– there’s now a national call to equip all law enforcement with body cams. Body cams… The idea, of course, is that we can use the technology of the digital surveillance state to spy on police and keep them honest. If we compel all law enforcement to wear body cameras they cannot turn off, the argument goes, the police will behave better and, even when they don’t, the video evidence will expose them and we can then weed out the bad apples.
If I remember right, that was the argument for installing cruiser cameras. Those are ubiquitous now. Police cruisers routinely have dash-cams. And yet, on November 29, 2012, over 60 Cleveland police cruisers took part in a car chase that ended with 13 officers firing 137 shots into the unarmed bodies of Malissa Williams and Timothy Russell. Even though, conceivably, we have 60 different angles to watch the grisly slaughter, that didn’t stop Cleveland Police Officer Michael Brelo from jumping on the hood of the bullet-riddled vehicle and unloading on unarmed civilians right through the windshield.

If that’s how Officer Brelo acts when he knows he’s on camera, and he’s conscious of it, we can’t even guess at the kind of holocaust he would commit when no one’s looking. I have to assume that the 60 camera angles potentially capturing all of the action had no restraining effect on Brelo or his fellow officers whatsoever.
Then there’s the murder of Eric Garner, executed by New York police for allegedly selling “loosies,” individual cigarettes. I have to wonder where these crusading cops were when the Phillip Morris Company was giving my dad emphyzema, selling cartons at a time. None of their executives have been strangled with police choke holds, though they deserve it far more than Eric Garner. But, important to our discussion here, those cops knew they were being video recorded via cell phone. They knew. They killed Eric Garner. The video showed it all. The cops got away with it. They’ll probably get promoted.
That cell phone serveillance did nothing to restrain them.
Then, there’s John Crawford, shot to death by police in Beaver Creek, Ohio, for playing with a toy gun inside the store that sold the toy gun. All of it was on security video. Police had to have seen the cameras. They had to know that all stores these days have security cameras. They had to have been fully conscious that their actions would be captured on video.
And still, they gunned that kid down.
Which takes us to the killing of Tamir Rice, a 12 year-old waving around a plastic pistol in Cleveland. The cruiser cams caught it all. Police pulled up and shot him dead.
They knew there was a camera.
For anyone who really believes that being watched will restrain police abuse, just check out any old episode of “Cops.” You can’t get through a half hour without asking at least once, “Was THAT really NECESSARY?”
Look, I live in the most serveilled space on the planet and I can’t tell you how many times black prisoners were brutalized by white guards and the cameras “didn’t pick it up,” while responses of black prisoners defending themselves always get captured in full technicolor. Police body cams would invariably work the same way. Or should I say, NOT work. Even proposals by RA Washington who edits FREE, an awesome publication available at guidetokulchurcleveland.com, falls short. Washington suggests an elected Civilian Police Review Board who would have body-cam footage and power to discipline police.
But such a board would be pressured and paid off and corrupted. Those who are incorruptible would get jailed after anonymous tips to crimestoppers uncover kilos of coke in their cars, and they’ll be replaced by Civilian Police Review Board members who play ball.
Body cams are not the solution. There are only two police officers I feel I can safely say will never shoot unarmed people of color: Wenjian Liu and Rafael Ramos.
This is Ohio Governor-in-Exile Elect Sean Swain from Ohio’s supermax facility. If you’re listening, you ARE the resistance…