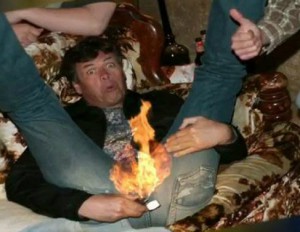 [Wanna support Sean? http://seanswain.org/how-to-support-sean-swains-hungerstrike/]
In recent phone interviews regarding the “investigation” into Anarchist Prisoner Sean Swain’s video visits (that did not happen), Ohio Department of Retribution and Corruption Investigator Paul Schumacher, a.k.a. “Sherlock Paulie SuperGenius,” referred callers to legal counsel defending prison fuckweasels in the civil action filed by Sean’s attorney, Richard Kerger. Paulie SuperGenius, having reviewed the white noise of the 4 video visits he did not allow Ben Turk to have with Sean, came to the undeniable conclusion that he really, really fucked up by targeting Sean for no legitimate reason at all, and rather than giving callers the same ridiculous answer that tasted bad in his own mouth (a contrivance about BLACK LIGHTNING and burning down the Statehouse– as if anyone would miss it) Paulie SuperGenius referred callers to a lawyer.

Meanwhile, anticipating that Sean may face federal charges for his admission that he has actively cultivated the super-power of shooting flames out of his ass and therefore plotted the immenent destruction of the Statehouse (as if anyone would miss it), supporters questioned an expert who may eventually be called in Sean’s defense. This expert affirmed “to a reasonable degree of medical certainty” that, generally, “all farts are flammable” and “Sean Swain’s ass” is “wholly unremarkable.” Also, Sean’s counsel, Richard Kerger, who IS a real attorney, prepares to file for an injunction in federal court that, if granted, would put the smackdown on these state-terrorists and would forbid them from blocking Sean’s communications mediums based on made-up nonsense (like BLACK LIGHTNING and burning down the Statehouse, as if anyone would miss it).