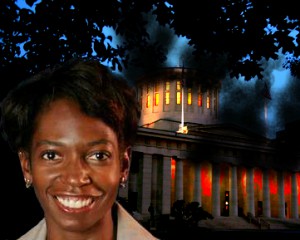 I write this with the intent to persuade you with reasoned arguments to burn down the Ohio Statehouse. It seems to me that if someone from some other profession were to light that building aflame– a teacher or a sales representative –the act would not have same impact as it would if a federal judge, someone with the highest legal acumen, spoke clearly about the legal and moral offense that is the Ohio Statehouse, using gasoline for nouns and matches for verbs.

I do not believe persuading you to such a free will act will be any easy exercise. I anticipate that it will be quite a difficult task. Not only are you steeped in the false narrative of the hierarchs, which is a very powerful tool to keep all of us from seeing our objective reality clearly, but, in addition, you have a pretty good gig going. You’re a federal judge. That’s no small amount of clout and prestige and power, beyond what’s probably better than a decent pay check. And, steeped in the hierarch narrative, your bench is the perfect platform for you to change the
world. Or so it would seem, Your Honor.

So, for you to march into the Ohio Statehouse with a can of gasoline and a book of matches to make a bold and shocking statement about the illegitimacy of power would be for you to essentially chuck that whole trajectory of your life in the trashcan. Quite a personal sacrifice.

While it may be unlikely that I will inspire you to torch the Ohio Statehouse, in keeping with my optimistic approach to things, I’d like to thank you, Your Honor, just in case you really do it. And, if you really do it, I recommend you get a good lawyer. Richard Kerger’s office number is (419) 255-5990.

And, to be clear, I direct these arguments to you as a kind of literary device, but also to put the arguments to the ultimate test. If anyone can exploit a flaw or fracture in my reasoning, it would certainly be a federal judge. But if, at the end of it, you have no counter argument, then I think we have to confidently conclude that the arguments I present are perfectly sound– however it is we may feel about them.

I submit to you that the Ohio Statehouse does not legally exist– according to your law –and that it is constructed in the midst of a territory that is not legally the property of the so-called “State of Ohio,” nor the United States, and that, further, the “State of Ohio” does not legally exist– according to your own law. Further still, it would appear from the historical evidence that this rogue state calling itself Ohio constructed the Ohio Statehouse only through the deliberate abuse of its system of justice, enslaving skilled laborers in order to employ them in the construction of this monument to oppression, erected upon the corpses of countless thousands of innocents.

And so my argument starts:

The Treaty of Greeneville in 1795 set aside the area we call Ohio as “unceded Indian Territory,” and forbid “white people” from entering. As the U.S. Constitution regards treaties as the highest law of the land and demands that no enactment of state law may even abrogate a U.S. treaty, I believe I need not attempt to impress you, Your Honor this treaty’s legal authority.
No subsequent treaty between these parties was ever ratified.
Legally speaking, the Treaty of Greeneville remains law.
Legally speaking, you are currently located in unceded Indian Territory.

The theft of this Indian Territory was facilitated by the first documented use of biological warfare on an innocent, civilian population. I describe this more fully in OHIO, VOLUME I, available at seanswain.org. The tribes of Ohio were given smallpox-infected blankets, exterminating them. Hundreds of thousands died, including the elderly, women, and children. It was an act so reprehensible that Adolf Hitler, in his book Mein Kampf, made reference to this racial cleansing as an inspiration for a project he hoped to undertake in the future.
The illegal conquest of Ohio gave Hitler his grand ideas about racial cleansing.

So the illegal violation of U.S. treaty was accomplished through well-documented crimes against humanity, through deliberate biological warfare, through genocide. War criminals without any legal legitimacy occupied and colonized the area called Ohio.
Since, there has been no intervening act that could in any way legitimize or validate murder, theft, and abrogation of a treaty that remains your law. In fact, in the 1950s, at the close of the Indian Claims Commission, U.S. Attorney General Francis Biddle admitted to the U.S. Senate that there existed not a single piece of paper to justify U.S. possession of more than one third of the continental U.S., to include, in his diagrams, the area called Ohio.
So, in the twentieth century, the highest law enforcement official in the United States, on record and under oath, testified that Ohio is, legally speaking, Indian Territory.

After 1803, thieves and murderers, in an effort to make their illegal project seem legitimate and legal, established themselves a central “government,” where they intended to exercise authority they did not legitimately possess. They needed a building as a testament to their swindle’s validity, and they sought to construct their monument cheaply. According to a documentary aired on the Ohio Channel, on public broadcasting, the rogue state called Ohio undertook to acquire free labor; it used its justice system to frame skilled workers in the trades that the State required for the Statehouse’s construction. The State then used those prisoners as slave labor.
People believing themselves to be citizens of a state were framed for crimes and exploited, their lives destroyed, in furtherance of the illegal project undertaken by rogue statists to legitimize their swindle. Innocent people were enslaved to build the Statehouse.
Because the so-called State cut corners on worker safety, many of those workers, framed by the courts and exploited for their skills, plummeted to their deaths. They were essentially human sacrifices to the construction of a blood-soaked idol erected on blood-soaked soil.

For a more developed treatment of all of this, with references, I recommend that you read OHIO, volumes I-III, available at seanswain.org.

Irrefutably and undeniably, this illegal rogue state calling itself Ohio has perpetrated a centuries-long, complex, vast criminal conspiracy under the auspices of legitimate authority, and their base of operations, the “den” of this den of thieves, is called The Ohio Statehouse. From there, the vast crime against humanity continues. To NOT burn it down is to become an accomplice, a collaborator, not merely in perpetuating a false history, but in maintaining a continued mythology, a false one, a false mythology that allows for the exercise of illegitimate authority in the present and into the future. NOT burning down the Ohio Statehouse equates with being a “good German,” one of millions of deluded “little Eichmanns,” marching to the drum of this false mythology.

It is more than denial; it is complicity to the ongoing, centuries-old atrocity. In this context, burning down the Statehouse is an act of conscience, a noble and heroic statement in opposition to an illegitimate exercise of power and authority. And if a federal judge burned it down, that would not only get the world’s attention and create a global, “teachable moment,” but it would be an act consistent with the oath to uphold the U.S. Constitution and its holdings regarding the primacy of U.S. treaties.
Not to mention the public space it would open by eliminating a phallic eyesore.

And, while I believe these arguments irrefutable, I would like to point out that, even if you do not accept these arguments and you instead conclude, Your Honor, that the Ohio Constitution (written by thirty-some trespassing white guys in Indian Territory) is valid, then torching the Ohio Statehouse still makes perfect legal and moral sense.
Article I, Section 2 of the Ohio Constitution provides that the people have the right to “abolish the government,” and that we may abolish it “whenever (we) may deem it necessary.” This word “abolish” implies force. To abolish something is to force it to cease to exist, without consulting it.
As, in the course of human affairs, no government has ever peaceably yielded to its own abolition, we can easily conclude that Tom and Friends, the white guys trespassing on Indian Territory, anticipated that, for people to “abolish” a government, the people would invariably have recourse to employ political violence.

Having said all that, what does any of this have to do with whether I am permitted video visits and the same venues for speech as other prisoners who are dumber than me, who are less informed, who do not yet recognize the undeniable and irrefutable truths that are at the foundation of my system of thinking– a system of thinking that makes more sense, and provably so, than the deluded false mythology of hierarchy and the senseless silliness of mindless state-worship? In order to address the human race on video and present my thoughtful views, my video access is dependent upon my theoretical and philosophical acceptance that states, including the rogue state holding me hostage, are legitimate and have a right to exist? From wher a precondition on the exercise of a protected right under your laws derive?
Only state-worshipping prisoners under the delusion of hierarchy’s false mythology may participate in the video visitation service? Does that sound right?
The fact that rogue-state apologists would propose such nonsense only reinforces my position. I believe the solution is obvious.
And gas prices are really low.

Thank you for your time and kind consideration of what I have presented, and if you see some error in my reasoning, I hope you immediately bring it to my attention and, also, to the attention of everyone who has been misled by my error. But, if not, I invite you, Your Honor, to collaborate with myself and others in bringing about a futur deserve.
One free of oppression and exploitation.