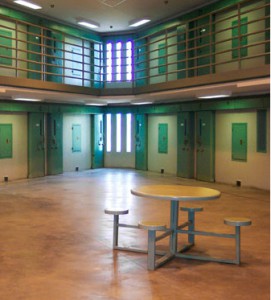 A couple weeks ago the weather broke and I went out to the yard. When I got outside, I knelt and brushed the grass with my hand. I felt sunlight and a gentle breeze on my face. I heard birds chirping.
This was my first time outside since 2012. I had to find a place away from everyone else and wipe the tears from my eyes.
Grass, wind, and direct sunlight didn’t exist at the Ohio State Penitentiary. Prisoners there go years and even decades without direct contact with others, without grass, wind, or direct sunlight. And recent policy changes there made the isolation and deprivation even harsher– policy changes that violate the hierarchs’ own laws –and the conditions have provoked several prisoners to hungerstrike.
Prisoners with no other recourse are starving and maybe dying, only asking that prison officials do what they claim they do… And the irrational prison officials refuse to budge, even if it means letting these desperate captives die.
Some context here: OSP is Ohio’s supermax. Prisoners there spend 23 hours in perfect isolation, afforded only an hour of recreation and a shower. Prisoners are cuffed from behind and escorted by two guards when taken to recreation cages, to the shower, and back to the cell. These recreation periods provide for the only real social interaction, as prisoners can talk through plexiglass indoors or through caging in the outdoor recreation area, which is a large cement enclosure with a fence for a roof.
Because of a recent stabbing of a guard by a prisoner with a long history of stabbing guards, OSP has now cancelled use of these recreational facilities, essentially turning the hour of recreation into a twenty-fourth hour of isolation. This policy change does nothing to make guards safer, but it eliminates the hour of human interaction– a restriction that doesn’t conform to the hierarchs’ own laws and constitution.
Consider: we know from all available data that longterm isolation, like at OSP, mangles the minds of captives. After just a year, prisoners demonstrate less social ability, increased aggression, and irrational anger. Reasonably, then, these INCREASES in isolation will result in MORE anger. By prison officials’ logic, since years and years of mind-breaking isolation created a prisoner who continuously stabs guards, the solution is to INCREASE the isolation that foreseeably leads irrational anger. In other words, the SOLUTION to the problem is MORE of the problem.
In addition to the recreation changes, OSP has also eliminated programs and religious services to a large segment of the population there. Beyond the unconstitutionality, these changes are particularly bizarre when we consider that, according to Warden Jay Lowdown’s own mission statement, prisoners prepare for lower security and for release through “programming.”
So, WITHOUT the programming, the new plan is to take the angriest and most maladjusted prisoners most in need of programming… subject them to conditions designed to make them angrier and more maladjusted… and withhold the programming that prison officials feel could help make them less angry and better adjusted.
That leads to FEWER guards getting stabbed???
A guard suggested in an online exchange that OSP prisoners should “prove” they “deserve” programs. What do I know, but aren’t prisoners supposedly sent to OSP because they NEED programs? I mean, by the prison system’s narrative, don’t the prisons claim to serve public safety? And wouldn’t that mean that prison officials get paid for employing strategies to make “bad” people “better”… not a deliberate process for making BAD people WORSE…? OSP is now doing openly the opposite of what their job is: they are deliberately making supposedly violent and aggressive captives MORE violent and MORE aggressive while withholding everything they believe could make the captives LESS violent and LESS aggressive.
That serves the public safety HOW?
It’s incredibly revealing that OSP prisoners are starving and dying in a desperate effort to compel prison officials to simply do what they say they do; prisoners are starving and dying, hoping to persuade intransigent and irrational prison officials to restore programs and privileges that might slow their transformation into monsters. It’s even more revealing that prison officials hellbent on turning captives into monsters against their will would rather let those people die than reform their monster factory.
Call Ohio Governor JWow Kasich at (614) 466-3555 and demand that he terminate ODRC Director Gary Mohr, and check out links at seanswain.org for what you can do to support these hungerstrikers. I think we need a national boycott of Ohio’s tourism industry until OSP is closed for good.
I brushed the grass with my hand the other day for the first time since 2012. I saw the tremors as my hand shook, a symptom of 18 months of isolation at OSP. I found a quiet place to cry.
This is anarchist prisoner Sean Swain from the Southern Ohio Correctional Facility in Lucasville. If you’re listening, you ARE the resistance…