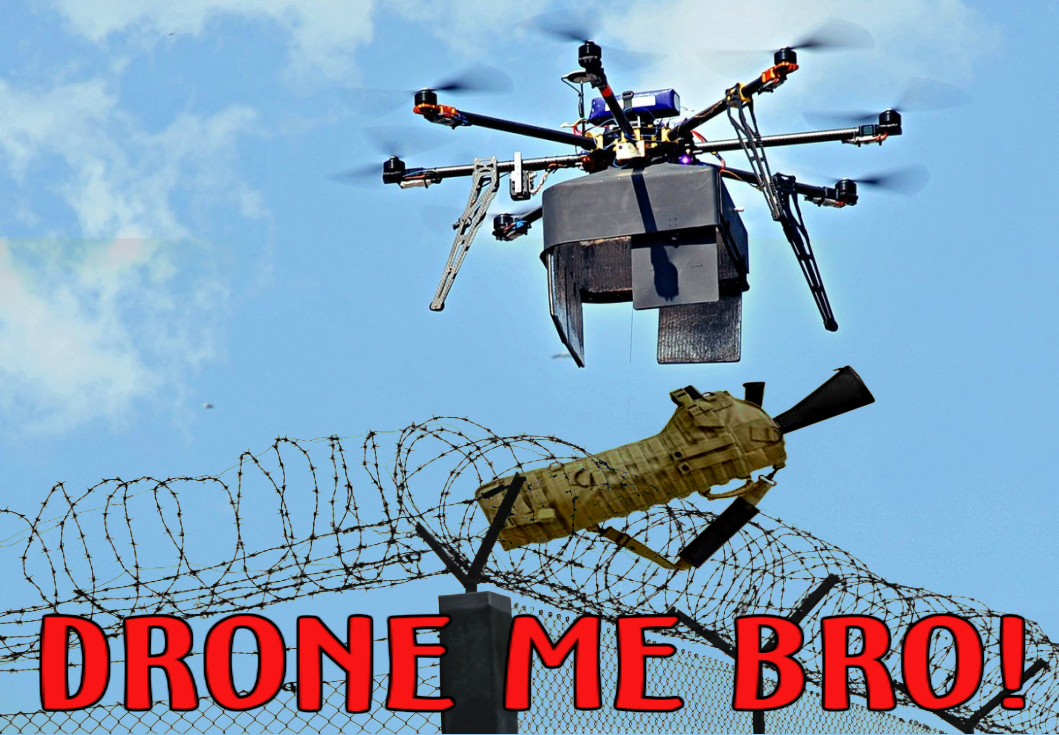 Two major events happened to the Ohio Department of Retribution and Corruption this past week, both representing serious challenges that confront the prison industrial complex long into the future. One of the events caught the attention of mainstream media while the other did not.
The first major event occurred at Mansfield Correctional Institution. A drone dropped a load of drugs onto the prison yard, which, really, is an event all in itself; and then prisoners who witnessed the drug drop caused a riot, fighting over the dope. Yeah. Dropping a load of drugs onto a prison yard has the same disruptive effect as throwing dollar bills from the balcony out over the floor of the New York Stock Exchange.
This is the first time, to my knowledge, that authorities have documented a drone making a delivery to a prison. That’s NOT the same as saying it was the first drone delivery. Very possibly, drones have been employed in this fashion for quite some time and, quite frankly, with the proliferation of drones everywhere– even to deliver pizza –drone deliveries of all kinds to prisons are simply the new normal.

I mean, think about it. The fences are only so high and you can’t put a dome over every prison in the United States. Prisons were not built to defend against miniature air raids and the new technology applications leave the sprawling U.S. prison complex completely vulnerable. How long before drones deliver dufflebags of assault rifles and bolt cutters and explosives?
How can a prison complex defend against a technology that can deliver an automatic rifle right to a cell window? It can’t.
The second event that happened to the Ohio Department of Retribution and Corruption got less attention than the drone, but might have an even greater, devastating long-term impact: Someone left anonymous postings at blastblog.noblogs.org. According to Deputy Director Ed Voorhies, who came to SOCF to speak to me directly about the event, the postings included home addresses of prison officials, and even photos of their homes.
That’s a big deal. Big enough, in fact, that the second-in-charge in the ODRC hierarch food chain came here because he thinks this event somehow involves me, and yet I’m not in the hole or beaten up or tossed onto a bus back to the super-duper-max. It’s a big enough deal that the fascist police state has not employed it’s typical violence but instead relies on its interpersonal communications skills training to try to get me to disavow those postings and persuade whoever posted them to take them down.
Now, to be clear, I didn’t post that information. I have no computer, no internet access, no cell phone to take photos of fascists’ homes. And if I did, I certainly wouldn’t hop back over the fence and return to my cell. So, I didn’t do it. And I really have no idea who did. Anyone with the skills to anonymously post information online certainly wouldn’t send me monitored snailmail with their real name in the return address, letting me know they did it. That’s ridiculous.
But what I do know is, when federal judge Benita Pearson’s address got posted, my legal counsel suggested that I write a statement for posting, asking that her address be removed. My attorney felt that would be beneficial since he was entering into negotiations for settlement of the 12-Monkey frame-up lawsuit. So, I wrote the statement and, surprisingly, the posting vanished, seemingly in response to my request.
Deputy Director Voorhies wants me to draft a similar statement to have prison fascists’ addresses removed. I have consulted my attorney on this, and it appears that he will probably be able to get to drafting that statement AFTER he finally resolves the 12-Monkey frame-up. So, once we put the civil action behind us and get the relief we need, we can look into the matter of possibly helping prison officials (who participated in torturing me) and try to get their addresses removed.
But in the meantime, I think we have to acknowledge that these postings greatly increase the chances of property damage to the homes and cars at those addresses. Has anyone called or emailed the major insurance providers– All State, State Farm, Prudential –to alert them to those postings? Someone certainly should. Insurance providers need to calculate this new risk and probably raise the premiums for anyone they insure at those addresses.
At any rate, these two events– the drone drop and the postings of prison fascists’ home addresses, signal the beginning of a new era where the police state is ill-prepared and overwhelmed, unable to face the challenges that confront it. It’s a brave new world.
This is anarchist prisoner Sean Swain from the Southern Ohio Correctional Facility at Lucasville. If you’re listening, you ARE the resistance…