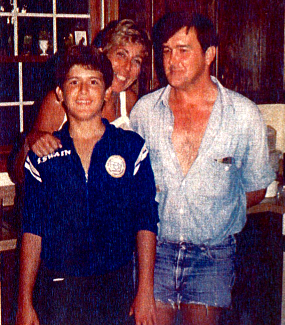 My parents are old. Old enough that this past Friday, they celebrated their 50th wedding anniversary. My mom is 70 and my dad is 69. He likes to tell everyone he is a decade younger than my mom. He thinks that’s funny. My mom, not so much.

My mom and dad do not know me as Anarchist prisoner Sean Swain. They know me as the idiot they embarrassed all through high school by showing every one of his girlfriends the photograph of him as a kid sitting on the toilet reading a comic book. See, when someone has a picture of you reading a comic book on the toilet , there is really no way later on in life to persuade them as to what an influential thinker you are.

Needless to say, my parents are not anarchists. My dad worked for Ford and retired from the factory after 30 years on the job. My mom was a stay at home mom. They have always paid their taxes and have never been late on a bill. Though they are neither Democrat nor Republican but register independents. They are patriotic. They have an American flag flying from their awning. Their 50th wedding anniversary was undoubtedly to them a landmark moment indicating they have lived their lives the right way, following the rules. Their allegiance to the larger systems to them is central to their values, to their sense of themselves. Their identities as good people, good parents, and good citizens.

Don’t get me wrong here, I love them dearly. They are two of the kindest gentlest, most loving people I know. I have never met anyone more honest more hardworking and more conscientious. I admire them and I admire their character. So there is a great source of frustration to me that when I advise them to run up their credit cards, sell what they buy on Ebay and keep the loot, telling the credit card companies to chalk it. Or when I tell them to take out bank loans and abscond, they at best think I am pulling their leg, or worst thing, I am mentally ill, that my long imprisonment has had a negative effect on my moral thinking.

My parents do not get me. They love me, but they do not get me. All of my criticism of hierarchical constructs, the system of capital, the expanse of major and mass production of food and how it all leads to a not so distant catastrophe and immisseration. I may as well be speaking Portuguese. Sometimes, in fact, it almost seems I have hurt my parents’ feelings. That they do not respond in defense of the system I have just criticized, but in defense of themselves. It is as if I blame them for the ills of the world. That feels particularly frustrating because I love them very much and I respect them and quite frankly much of what motivates me to resist is a lifetime of watching them get a raw deal they didn’t deserve.

So I am not sure how to explain my thinking to them in a way they don’t feel I am criticizing them. Could it be that it is not possible since we identify somehow with the system I oppose? I am not sure. But I also have think that I am not the only anarchist on the planet that experiences this disconnect. Anarchists everywhere must have similar struggles. Strong and abiding emotional ties to some folks who are for better or worse, lifelong hierarchs. It’s hard isn’t it?

I do not have any answers. But maybe it is an unrealistic expectation that everyone will understand everyone else. Maybe, in my situation, with my parents, it should be enough to know they love me and that they know me. They know my character, who I am. So whether or not they understand my thinking or my ideas, they know I want a world with less suffering and more joy. I know what they do too.

In the bigger picture then, it may not matter so much to those two people with a photograph of me reading a comic book on the toilet that I seemingly speaking Portuguese. So whether they understand what I say or not, this is Paul and Nancy’s kid from Warren Correctional Institution in Lebanon Ohio, if you are listening, you are the resistance.