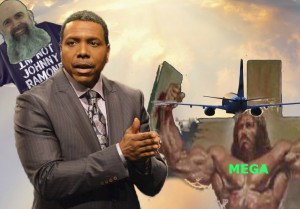 This originally aired on The Final Straw Radio.

Evangelist Creflo Dollar has given me a fantastic idea that I really need to share with you… Especially if you have some MONEY.
Creflo Dollar runs a mega-church in Atlanta and recently opened a franchise of his mega-church in New York. For anyone unfamil mega-church is to a regular church what super-size fries are to regular, mundane fries. Reverend Dollar doesn’t preach about Jesus to his mega-church members; he preaches about mega-Jesus. I don’t know much about mega-Jesus, but I imagine if mega-Jesus and boring old son-of-Mary-and-Joseph Jesus got in fight, mega-Jesus would hand mundane Jesus his ass. That’s my guess.
I think Creflo Dollar’s franchise in New York has a drive-thru. Not sure.
“Can I get some Jesus please? And SUPER-SIZE him.”
I said “super-size,” not “circumsize.”
So, anyhow, this Creflo Dollar character with his mega-Jesus recently posted a request to his mega-church’s mega-site. He aims to turn the entire world into his super-duper-uber-mega-ultra-hyper-turb He asked mega-church members to donate $65 million so he can buy a G-650 jet, referenced in popular music as a “G-6.”
Creflo Dollar needs to buy a G-6.
See, mega-Jesus, despite all his super powers, has managed to generate very little revenue all on his own. So, to get out the mega-message, mega-Jesus needs Creflo Dollar to get a $65 million celebrity-jet and go zooming around the globe.
You know, becaus there are such huge areas of the world that haven’t heard of mega-Jesus. And clearly there are billions who have not experienced the prosperity that mega-Jesus and Creflo Dolar have been promising. In fact, if we didn’t know better, we’d almost think this whole Christianity program was a complete swindle keeping the poor of the world under control while the Creflo Dollars burn up their o-zone with designer jets.
You’d almost think.
But whatever you think about Creflo Dollar’s version of the good newsmessage, I think he’s got a fantastic idea on how to deliver it. And if Creflo Dollar can employ air flight to deliver the good news that everyone needs Jesus, then why can’t we anarchists employ air flight to deliver the great news that nobody needs Jesus? I was pondering this out on the open prison yard:
Look, from here, confined at maximum security, I’m able to spread the great news of anarchy and insurrection and direct action to a limited audience. But there are plenty of places in the world where folks are completely unaware of our liberation theory, many of them living in nation-states that have no extradition treaty with the United States– not that that matters. And I firmly believe that I’m the perfect anarchist to serve the mission of spreading the great news.
I’m volunteering.
Somebody’s got to do it.
Of course, I’m not thinking quite so extravagantly as the mega-churchies. I don’t need a G-6. I don’t think I even need a plane. I think a helicopter would do the trick. A used one.
At seanswain.org, we looked into the market for used helicopters. We found one for sale by an owner who got the helicopter from Cambodia, slightly damaged. From the photos, none of the bullet holes appear to have effected any of the essential components. It can be repaired, it appears, with a little duct tape and a can of spray paint.
This is my thinking: To follow in Creflo Dollar’s footsteps– or should I say, his “air space” –I’d need a helicopter, 2 rolls of duct tape, a few AR 15 rifles with full compliments of ammunition, a rope ladder, a first-aid kit, a few cases of RC Cola with several bags of cheese puffs, 6 gallons of orange juice, a sewing kit in case statists can shoot straighter than they look like they can, some extra cash for re-fueling (unless we intend to steal the gas, at which time we’ll need a stockpile of ammunition), a boom-box with the entire collection of Rage Against the Machine, batteries for the boom-box, 2 more rolls of duct tape– you can never have too much duct tape –and an “I’m Not Johnny Ramone” t-shirt for my public appearances. Oh yeah– we’ll need an inflatable raft just in case the coast guard gets us on radar.
You just never know.
As far as the facilities for where we stay, we’ll worry about that if we ever make it out of U.S. airspace alive.
And anyway, we don’t need $65 million. All we need to start my global tour for the anarchist insurrection is $86,423.14. That’s all. So, we need your donations. If you have money, feel free to donate online at seanswain.org. Or, if you want to send cash, send it to Ben Turk at the address we’ll provide at the site. Just wrap it up in tinfoil so mail workers won’t steal it. And be sure to notify Ben that this is for my helicopter, otherwise he may just order a LOT of pizza with your money.
Trust me. Ben can put away some pizza.
That’s $86,423.14. That’s our goal. A small price to pay for financing a global tour promoting the anarchist insurrection in countries with no extradition treaty with the U.S.
We also need a few volunteers as travel companions. You must be able to use automatic rifles effectively and know how to tie a tourniquet.Things just might get hectic.
This is anarchist prisoner Sean Swain from the Southern Ohio Correctional Facility in Lucasville. If you’re laying down grazing fire, you ARE the resistance.
* * *