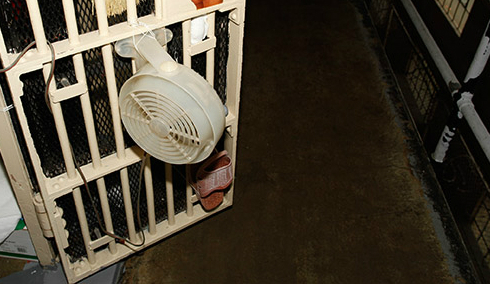 Cory Stephens has been here in Shitville for a couple of summers. Summers suck. In the cell blocks, the heat rises to well over a hundred degrees and there’s just no relief. On top of it, throughout his childhood, Cory had asthma. Now, in his twenties, his breathing only gets aggravated when it’s extremely hot or extremely humid. So, those blistering days locked in a steel cage carry the added, ominous threat that Cory may find himself wheezing and desperate for air.

He doesn’t have a lot of financial support and like most prisoners here, he lives month to month on a stipend of less than twenty bucks– funds he uses to buy soap and writing supplies, toothpaste and deodorant. So, an appliance like a fan is typically out of reach. Recently, however, he had a nice windfall of fifty bucks and immediately ordered a fan and an electrical power-strip to plug it in. No more wheezing and gasping for air. And, all things equal, he’d get his fan right before the hottest weekend of the year.
So, look: here’s how it works. We get our commissary order forms on Friday. We fill them out. Our orders get filled the following Wednesday. Anything not filled on Wednesday gets made up on the subsequent Friday. At least, that’s how it works on paper.

Cory ordered his fan and power strip on Friday, 10 July. Several other prisoners here in L-5 ordered fans also. Wednesday, 15 July, those prisoners’ fans and power strip weren’t given to them. No explanation given. Cory was told he’d get his property on Friday, 17 July.

He wasn’t happy about it, but at least he’d have his fan by the hottest weekend of the year.

Friday came. Cory’s fan and power strip didn’t. None of the L-5 prisoners got their fans. No explanation.
And keep in mind, the commissary fuckweasels had already been paid for those appliances, had been paid on the agreement and understanding of prompt delivery.

Five days after his property was supposed to be delivered, Cory asked what was going on with his fan and power strip. No explanation. A week later, he saw Ms. Wagner in the hallway outside the chow hall. She’s the fuckweasel in charge of commissary. He approached her politely. She sneered and said, “Don’t ask me any questions about commissary.”

No shit. Her JOB is to run commissary. She took Cory’s money almost two weeks ago and essentially swindled him… And she believes that somehow she should be immune from so much as answering questions from the victims she has robbed.

Another staffer, on the basis of anonymity, asserted that Ms. Wagner believes she can do anything to anyone because “she’s fucking a captain.” This may or may not be the case, but the use of her vagina aside, Ms. Wagner’s attitude is reflective of a large number of ODRC staff who simply come to believe that we, the prison population, are here for their (the staff’s) benefit.

You would think that the entire criminal justice apparatus, from the arresting police to the sentencing judge, all perform their functions so that Ms. Wagner and her equally-delusional co-workers can live happy, wonderful lives on the ODRC gravy train– as if they occupy the center of the universe and all of us are simply in orbit around them.

THEY are entitled. WE don’t count.

In fact, we’re not even human to them. We are items to be shelved and inventoried. So, Cory’s suffering and wheezing matters no more to fuckweasels like Wagner than a dented can of soup would distress a stock boy at the supermarket.

And really, this whole delusional belief system is perpetuated by the fact that the Cory Stephens locked in cages in sweltering heat have no one to advocate for them, have no power to take fuckweasels like Wagner to task.

They think they can get away with anything.

You can contact Shitville Commissary Supervisor Wagner at (740) 259-5544. Let her know how you feel.