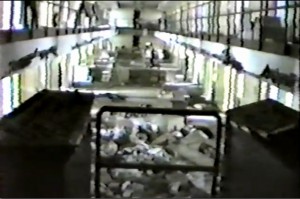 Sean’s current cell block, as trashed by rioters in 1993.

We have not heard from Sean directly or indirectly since Monday May 11th. [update: we have received word from Sean confirming what the prison says below. Sean adds: “You should get a copy of the conduct report in a few days. Shoemaker intended this to be a level 5 incident. SOCF locals aren’t for the reindeer games. 30 days privilege restriction, phone, JPay. Visits are unaffected.” Also, incoming mail is unaffected, so please feel free to mail stuff to Sean. ]

We suspect the conduct report is manufactured bullshit. We suspect the “30 day restriction” will last more than thirty days. Sean has been on a “temporary” restriction from access to video visits since January, a restriction the screws refused to lift despite a hunger strike, medical strike, large call-in campaigns and (tragically unsuccessful) legal action.

We hope to hear the full story from Sean soon, but we aren’t holding our breath. In the past, mailroom fuckweasels have interrupted, tossed out, refused, delayed and otherwise fucked with his mail. In the meantime, he has expressed a strong disinterest in phone calls and letter writing and likely hopes to hear some stories from folks on the outside soon. Also, you should know that the Fascist Bozos of Ineptitude (FBI) generated 1,297 pages of investigative files on me during the course of my imprisonment. I’m one of my favorite topics, and I write about myself quite frequently, but I can’t think of 1,297 pages to write about me. So that means the FBI knows more about me that I do. My file is available from the FBI as a three-disk set that costs $40. That’s roughly the same as the Sex Pistol’s box set. If ever you have a choice between the two, I would suggest you can’t go wrong with the Sex Pistols.
END_OF_DOCUMENT_TOKEN_TO_BE_REPLACED

The Oppressive Department of Retribution and Corruption (ODRC) has officially blocked my communication with the outside world, completely, silencing me indefinitely. It’s totally unprecedented. I cannot even contact my mom who just got through total hip replacement surgery.

I am cut off totally from the outside world which involves the collaboration of Jpay to block all emails and freeze all funds, and tele and Global Tele link to lock me out of the phone system. I’m the target of fascist fuckweasals and multi billion dollar corporations that seek to the plug on my involvement in AshevilleFM.org “The Final Straw”radio show.

To describe this fascist, extra judicial scenario, I have to find ways to smuggle communiques out of a super maximum security facility. Fortunately, while the fuckweasels are brutal, they are not very bright. Frankly, getting this out to you was so easy, I really, I don’t feel safe with shitheads partrolling the public.

I don’t want to reveal how this got out in case I need to keep using this system- no telling how long I’ll be Blacksited, given how incredibly dangerous my own radio segments are-but once this is over,I’ll give a detailed account and we can another good round of laughter at the expense of these goof troops. END_OF_DOCUMENT_TOKEN_TO_BE_REPLACED